Posted on December 19, 2011 by everythinginbetween

Some of my favorite posts this time to read and write are the end-of-year wrap-up posts, detailing favorite books, movies, plays, recipes, clothing purchases…you get the idea. Normally I at the very least try to couch my book and movie experiences, if not the plays I saw and food I cooked,  in clever lists and funny categories , but this year? Well, this year, she happened: 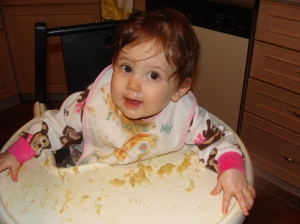 And for a little while, all hell broke loose. If it wasn’t part of the Hunger Games trilogy I didn’t read it; if it was smothered on a bagel and followed by a mega-ton of icecream (ah, those early nursing days!) I didn’t eat it, and as for movies? Bwah ha ha ha. Someday when I have a day to myself I will spend it going to yoga and the movies.  Since a lot of my year was spent adapting to life with a baby, and then adapting to life with a baby while working, and then adapting to life with a baby while working while also returning to some semblence of fitness and a social life, I think I can say a little something about each of the books I read, movies I watched and albums I purchased in one post, instead of the usual three or four.  Here we go. Edited to add: as I am writing my book wrap-up it seems to be a bit longer than I intended – movies/albums/recipes will be a separate post!

Moonlight Mile, Dennis Lehane – For fans of his Patrick and Angie series, this was very obviously a concluding novel he had to write and we had to read in order to recognize that LeHane, like his characters, is moving on. I would feel more sad but Tana French novels are fulfilling the void this series leaves behind. It helps that LeHane is writing amazing work like The Given Day.  And I know if he does come back with another Patrick and Angie book, it will totally kick ass. Bittersweet book – worth the read if you need closure with these two characters.

Year of Wonders, Geraldine Brooks – hazaah, I wrote a review of this one! Here you go! https://everythinginbetween.wordpress.com/?s=Year+of+Wonders

Swan Song, Robert McCammon (reread) – I reread this in my eighth month of pregnancy while convalescing from a broken toe – it is one of my favorite post-apocolypse novels ever – it might even beat Stephen King’s The Stand although I am not ready to back that claim completely yet. The relationship between two of the main characters – Josh and Swan – is character development at its very best and it is a relationship I often think about. Only the very best fiction can do that.

Four Corners of the Sky, Michael Malone – This books is a complete retelling of one of my most favorite novels, ever – authored by Malone – Handling Sin. In fact, a lot of the reviews are scathing in Malone’s plagiarism of, well, himself. While this didn’t stand up to Handling Sin’s greatness, in my opinion, I loved the retelling of a very similar story from a woman’s point of view. I’m also of the belief that there really are only two types of stories (A stranger comes to town, or character goes on an adventure) and I find so much honesty and compassion in Malone’s writing.

The Hunger Games Trilogy, Suzanne Collins – This trilogy helped me finally understand the fanaticism that surrounds Harry Potter and Twilight. Having neve read either series I admit to scoffing a bit at adults, not who have read the series, but who have taken it dressing-up-for-movie-premiere lengths or, worse, arguing Team Jacob or Team Edward with their teenage daughters.  But I loved this series and thought it exceptionally well-done, especially in terms of tackling complex issues with simple language, and I have decided that March 13, the day the movie premieres, will be my first day off work without Evangeline, and I will go to yoga and to see this movie during the day.

Squirrel Meets Chipmunk, David Sedaris – Pure brilliance, and this is coming from someone who thought he peeked at Me Talk Pretty One Day. It turns out for some of his work you simply do have to be a bit older – I also reread a couple of his essays recently and realized I appreciate them much more now than I did the first time around. Anyway, Sedaris manages to do an almost-disturbing job of capturing human nature in this book. I found myself continually turning the pages, reading it as though it were a novel which it most definitely is not. I had to force myself to really take time with it – highly recommend this work.

BossyPants, Tina Fey – Thoroughly enjoyable read although I would hesitate to call it a proper memoir…Fey’s narrative structure is pretty loosey goosey but let’s be real, here – who doesn’t LOVE Tina Fey? She writes the way I imagine she would speak and she tackles issues near to my heart, including men/women interaction in the work place, breastfeeding, where women find their sense of worth, etc. I particularly love her discussions on improv, and how improv is all about saying yes, and when she joined the working world it seemed to be all about saying no, and how that just didn’t jive with her way of being. Since reading her book I have worked very hard on saying yes whenever possible, whether for work, giving money to the homeless or accepting an invitation out.

The Girl With the Dragon Tattoo, Steig Larsson – I have mixed feelings on this book.  On the one hand I really enjoyed the suspense and the relationships Larsson created but on the other I don’t think it pulled me in enough to read the other two in the series…but I hate not finishing series out! I could use some guidance…in your opinion, is  this trilogy worth completing? I felt Dragon Tattoo just went on too long and if he had cut about 50 pages I would have been much more engaged.

In a Sunburned Country,  Bill Bryson – Billy Bryson’s work has always been a bit hit or miss for me…I’ve really enjoyed most of what I read but I ended up quite frustrated with A Walk in the Woods and another of his books, the one about small-town America with a title I can’t recall, seemed to lack empathy and even occasionally seemed mean, so much so I stopped reading it.  But I thoroughly enjoyed this book about Australia and found myself so inpsired by his story-telling that traveling to Australia is officially on my list of “must dos before I die,” whereas before reading this I didn’t have nearly as much interest. GREAT nonfiction work.

Savages,  Don Winslow – I actually reviewed this book. If you are interested, check here: https://everythinginbetween.wordpress.com/?s=Savages

State of Wonder, Ann Patchett – I found this re-telling of Heart of Darkness intriguing and beautifully crafted. I really fell into this book, and I found the commentary on big pharma particularly timely. This is my first Patchett novel but it certainly won’t be my last.

A last minute add…I just completed The Five by Robert McCammon – a fabulous combination tribute to road-warrior bands, music and the history of rock and roll as well as a little bit of horror.  I definitely recommend it if you have any sort of affinity for modern music!

This entry was posted in Uncategorized. Bookmark the permalink.

8 Responses to December Wrap Up – Books